Airborne laser scanning (LiDAR) is used in forest inventories to quantify stand structure with three dimensional point clouds. However, the 3D distributions of the point-clouds depend not only on stand structure but also on the acquisition device parametrization. Indeed, the point density, the incidence angle, the emitted intensity, the footprint size, the flight altitude, the pulse duration, the electronic system of discretization and several other parameters may affect the tree-dimensional organization of the point-cloud. Thus, two datasets, even when sampled at the same place and at the same date may provide different derived metrics if they were not sampled in the same way.

This issue, which is encountered by managers in the Ministry of Forests, Wildlife and Parks in Quebec, may decrease the interest or the accuracy of the LiDAR for large-scale inventories. Ultimately, each dataset should be sampled with the same device and the same settings to provide a unique and safe sampling design around the world. Obviously, it would  be technically impossible to impose the use of a unique device with fixed settings. Several companies and several brands share the market and some improvements and innovations are regularly made with more efficient devices regularly being made available. Thus, if we cannot impose a standard, we can instead try to understand and correct the variations attributable to the acquisition parameters and normalize the point cloud as if it were sampled with a unique and theoretical standard device. 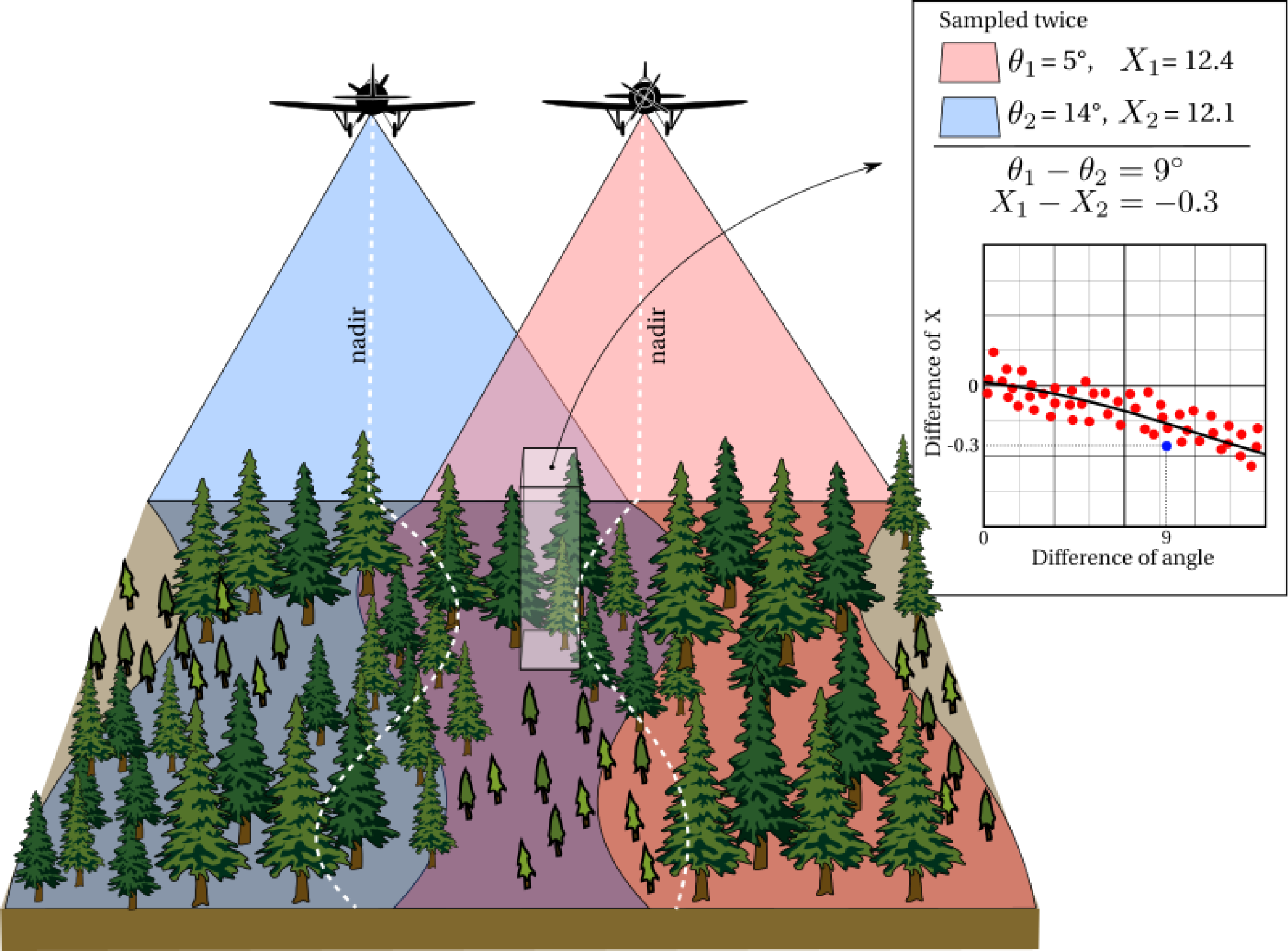 Illustration of how different sampling parameters may lead to different derived metric even for a single region of interest sampled at a unique date.

This is the approach explored in the thesis. Two settings were independently explored: the pulse density and the beam incidence angle. The analysis was made with a hypothesis-driven approach describing the physical principles that rule the acquisition. Then, we mathematically formalized these physical principles and compared the theory to actual data to evaluate if the models provided fair descriptions of the physical reality. After this evaluation, we found that our models were applicable to the conditions for which they were developed and, if these conditions were met, could enable users to correct some derived metrics from the effect of the sampling density or the beam incidence angle. This is considered as a first step towards producing normalized point-clouds that are independent of acquisition settings.

In short, the pulse density model informed us that the higher the number of pulses, the higher becomes the probability to find the highest elevation of a given area (e.g. a tree top). Thus, at low sampling densities we tend to underestimate the maximum height. This implies that the elevation of the digital canopy model is underestimated, as well as the high percentiles of height. Using the measure of the local sampling density and a rough knowledge of the vertical structure of the canopy, our model recomputes the metrics approximating a dataset that would have been sampled with an infinite pulse density.

The model about scan angle is based on the simple principle that the greater the incidence angle, the longer the path across the canopy. In turn, this also implies a greater probability to get intercepted by a canopy component compared to beams sampling at nadir. Thus, at high incidence angle the metrics are expected to differ from those obtained at nadir. Again, we wrote a formal description of this principle, which successfully matched the behaviour of actual data. Thus, under certain conditions that were met in a northern hardwood forest, we were able to recompute metrics approximating a dataset that would have been sampled with no scan angle variations (always at nadir). 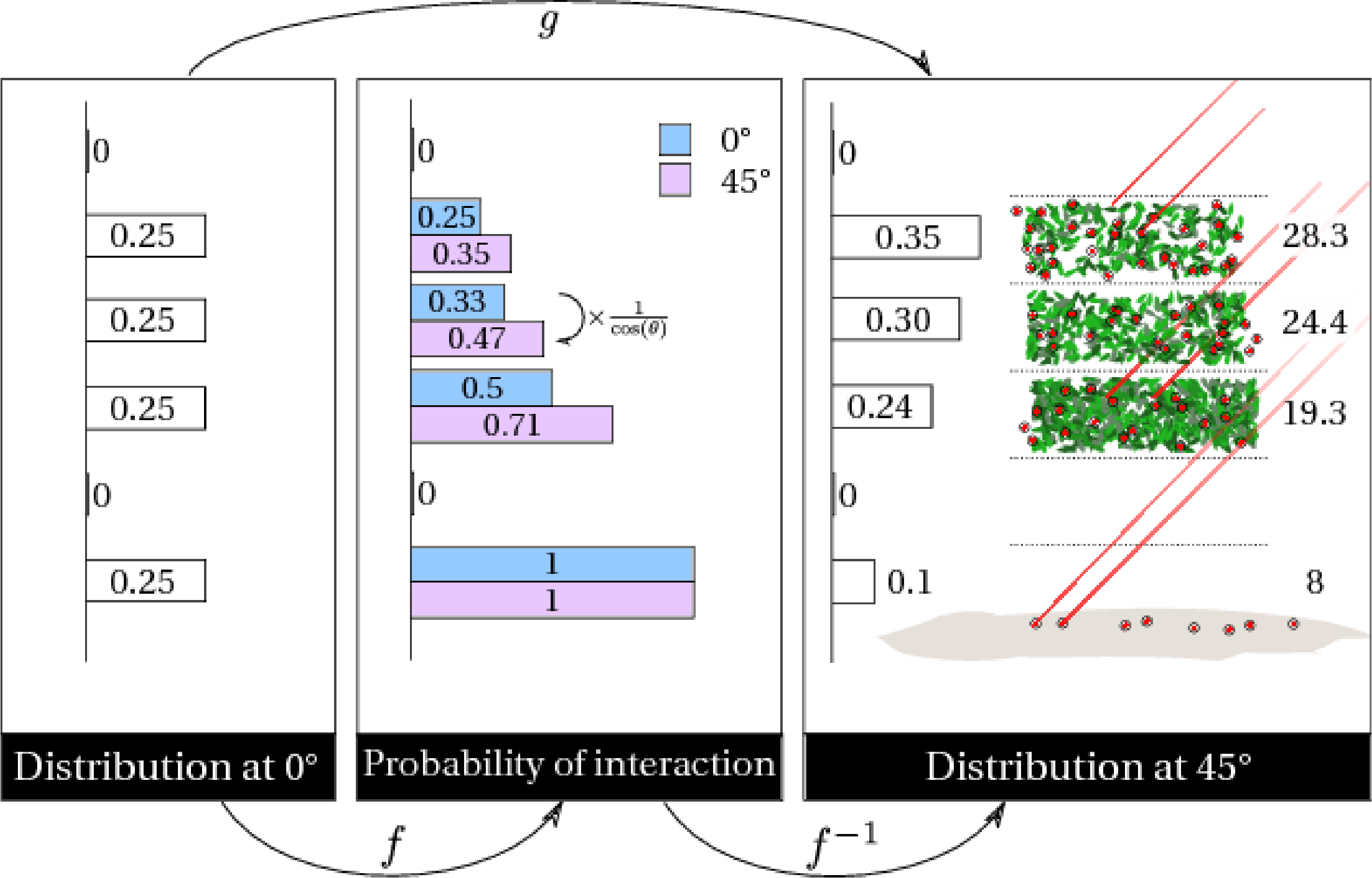 These two models were published as peer-reviewed articles in Remote Sensing of Environment.

Also, the three years spent doing this PhD were dedicated to the development of the lidR and rlas packages for the R programming language. These packages enable users to manipulate their LiDAR data within the R environment. Despite the fact we have almost never talked publicly about it the package, it gained rapidly in popularity, even before it was officially released on CRAN. This demonstrates the real need of the community for such a tool. Indeed, lidR implements, in addition to an important toolbox for reading, filtering, manipulating, merging LiDAR data in an extremely flexible and straightforward way, several algorithms from the literature that are probably only available in this package. According to the feedback received during the past two years, lidR helped many people explore their data, and drastically simplified their workflow. The lidR package might therefore be considered as a major contribution to the community, probably more than any academic paper. We are continuing the development of the package 2018, thanks to the Quebec Ministry of Forests, Wildlife and Parks.

Other Presentations and Talks