The development of a cost-effective inventory cycle using remotely sensed data is required by forest managers. Research has shown that area-based forest attribute predictions can accurately be made in simple boreal sites, as well as complex coastal environments with varying slope and canopy cover. However, few studies have explored the accuracy of forest attribute estimates from image-based point clouds in highly disturbed environments, or the potential of a multi-sensor approach to monitor forest growth.

These knowledge gaps motivated this study’s primary research objectives: (1) to assess the combined utility of ALS and DAP data sources to measure Lorey’s height growth (∆HL) in a managed and highly disturbed boreal mixedwood forest near Slave Lake, Alberta; and (2) to assess the effect of stand condition on  ∆HL estimation accuracy.

Studies that have developed predictive models for forest stand height using three-dimensional point cloud data have often used solely height metrics as predictor variables. In evaluating ∆HL, growth models were developed using two approaches: the first developed initial (T1) and final (T2) ∆HL models using point cloud metrics describing height, canopy cover and height variability, and the second developed the models using point cloud metrics that only describe height. Models based on multiple predictor variables will subsequently be referred to as the multi models, while models based on height variables alone will be referred to as single models. Multi models were built using multiple linear regression in which cloud metrics were divided into the aforementioned three classes of predictor variables. A forward stepwise variable selection approach was used resulting in models with the lowest AIC and where all predictors were statistically significant. Single models were developed using the height percentile metric with the strongest correlation with ∆HL was chosen as the single predictor variable for a linear regression. Predicted values for ∆HL were derived by differencing the predicted values from optimized ∆HL models at T1 and T2.

An exploratory assessment of the relationship between plot-level mortality and relative root meat squared error (%RMSE) was executed. Plots were ordered according to tree mortality (defined as the percentage of dead trees in a plot) observed during the T2 field campaign. The %RMSE for ∆HL was then evaluated using models optimized from the first objective in an iterative process. The model’s %RMSE was evaluated for a subset of plots with increasing sample size (one additional plot at each iteration, ranging from 5 to 27 plots), and thereby incrementing the included mortality.

The T1 ALS multi model (R2 = 0.94) explained slightly more variance than the T2 DAP multi model (R2 = 0.91), and the differences in RMSE between single and multi models were small at both T1 (0.17 m, 1.15%) and T2 (0.3 m, 2.90%) (Figure 1). This shows minimal detail is added through the inclusion of canopy cover and height variability in predictive models for T1 and T2. However, the RMSE of growth_multi was 0.336 m (38.85%) less than growth_single and the correlation with observed ∆HL was 0.09 greater than growth_single (Figure 2). Due to slow growth observed in the plots (mean ∆HL of 0.87m over 8 years), the differences in RMSE between single and multi models at T1 and T2 were large relative to the growth magnitudes. In the context of growth analysis using the indirect method, minimizing the RMSE at T1 and T2 is crucial to discern the growth signal from RMSEG.

The stand mortality sensitivity assessment showed that %RMSE did increase with increasing plot-level mortality. The trend between model error and mortality indicates that when the maximum allowable mortality is approximately 25%, then the %RMSE is just below 100%. Given a mean growth rate of 0.11 m/yr in this set of plots, approximately 12.79 years (an additional ~5 years) would be required for the growth to exceed the modeling error. A multi-sensor approach to growth monitoring would then be suited to less disturbed boreal sites or faster growing sites such as temperate forests.

The province of Alberta, where this study area is located, has invested in near wall-to-wall acquisition of ALS data between 2003 and 2014 and is interested in maximizing the utility of the existing data set. By supplementing ALS data acquisitions with DAP, the forest industry can save on operational costs and provide other predictive statistics including spectral tone, texture and pattern. These recommendations must also be considered with respect to the study site itself, where higher quality acquisitions are needed for disturbed, slow-growing, dense stands. 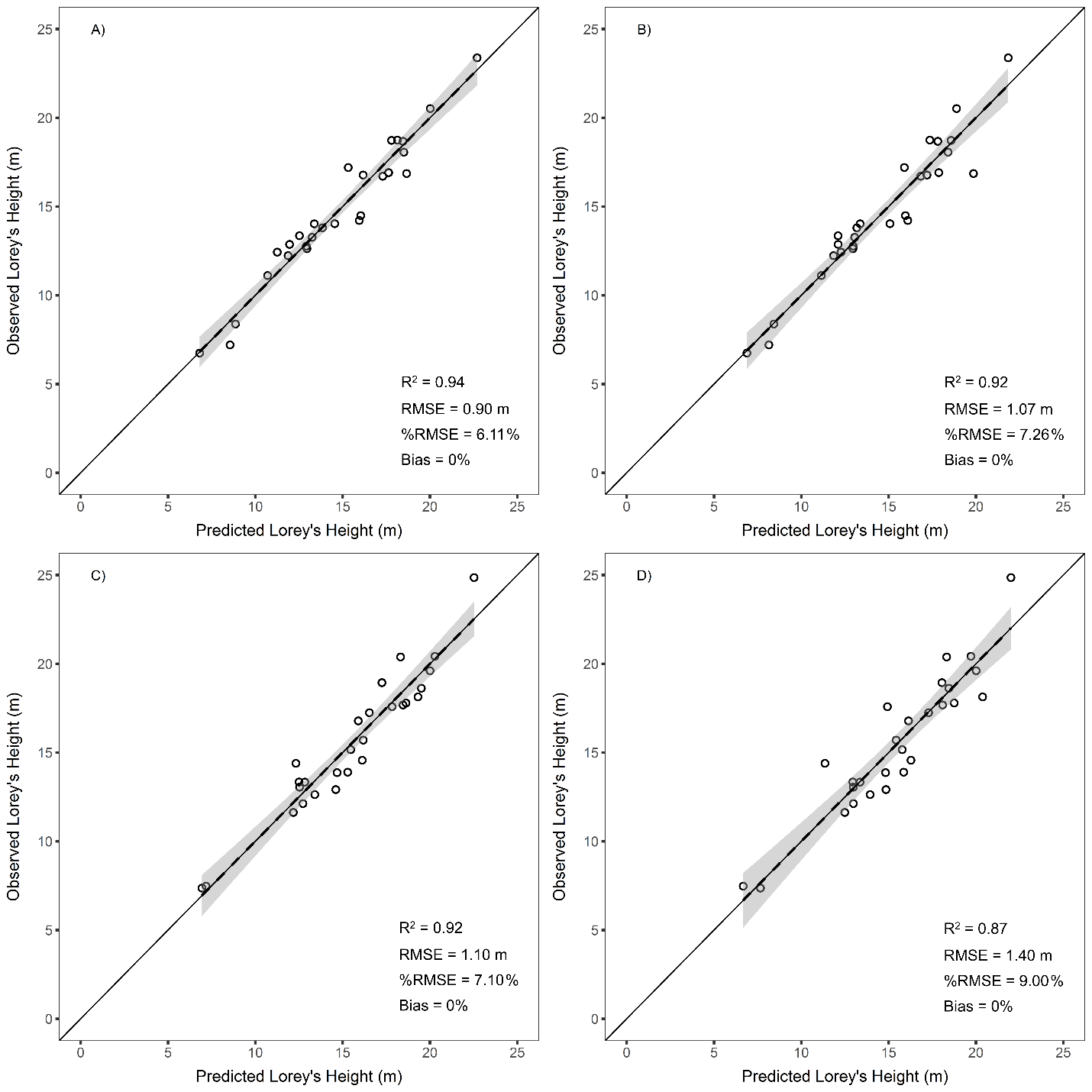 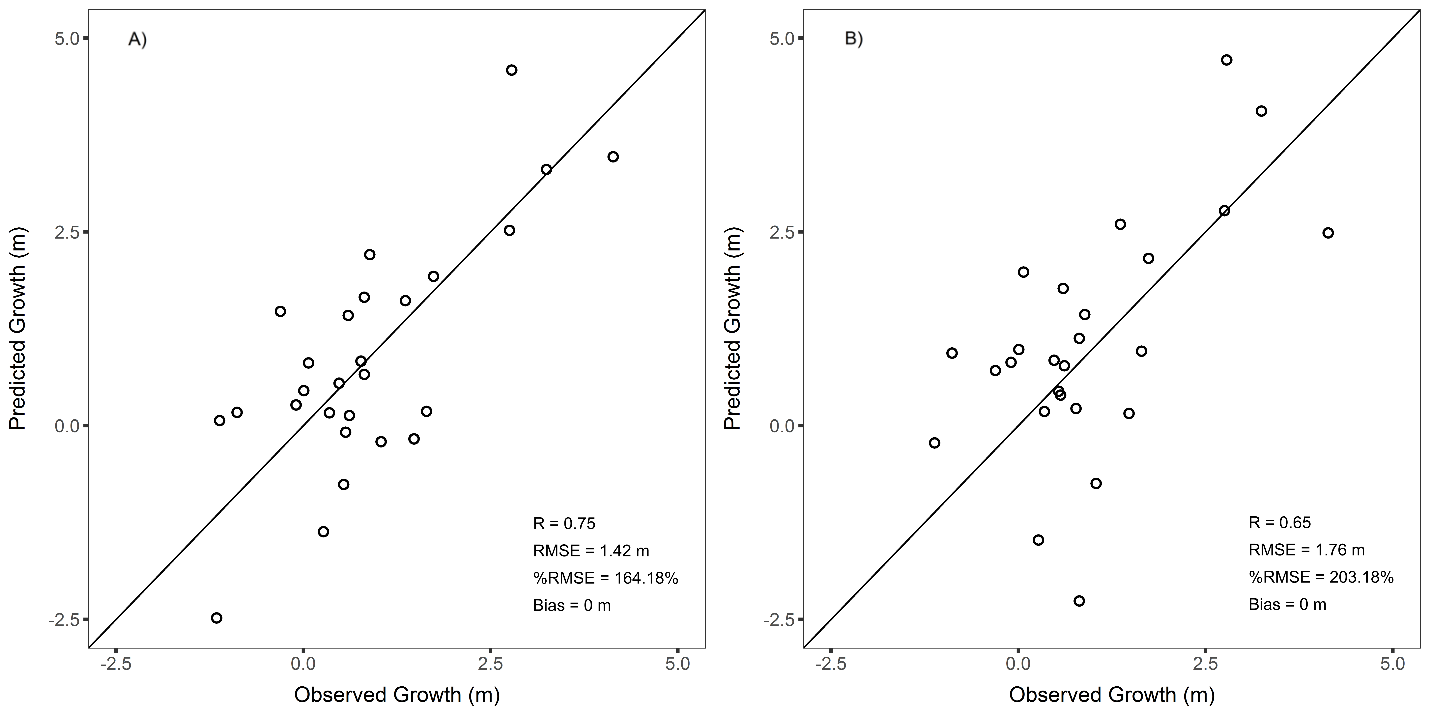 Figure 2. Scatterplots for observed and predicted values of ∆HL from models shown in Figure 1. Growth shown using models built from A) multi, B) single